Here’s just a quicky post from my phone. I have so many posts up my sleeve, but absolutely zero time to sit down, upload photos and write about it. Sound familiar? Yes, it’s the breathing in and out of being completely consumed with life.

We are busy putting in a mini- library (a.k.a. bookshelves), trying to put some kind of order in our house, I’m almost finished making my sister’s baby gift (after many many hours, didn’t make it for the shower in time), and keeping the children alive and well (job number one). 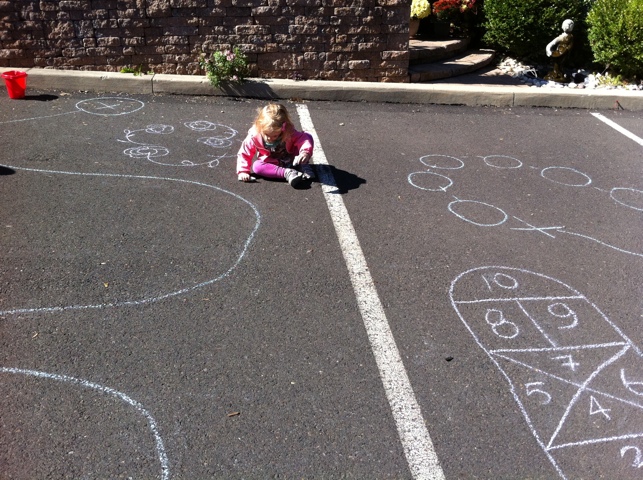 The weather has been fantastic (finally stopped raining), so we have been outside every chance we get. I drew B a little play ground in our parking lot. Our neighbors especially like the hopscotch. We’ve been to the farm and nature walks often.

Hopefully I’ll get a chance to sit down and share soon!

After a very wet August, Irene hit the East Coast. In our neck of the woods, we did not have much damage. We were without electricity for two and a half days. Nothing major lost. Other people closer to the river and the many many streams and creeks in Bucks county were not so lucky. Basements were filled with water. Surprisingly, many of the businesses located along the river were sparred. The river did not go quite high enough. Until the last storm. September 7th and 8th gave us a really good rain. Up the waters went. I’m not sure what the river level was from Irene, but this time it hit 16.14 feet. 13 feet is flood stage in New Hope. So, yes, it was flooded. Not as bad as other floods, but as Nick pointed out to me, 5 of the top 16 floods in recorded history happened in the past 10 years. September 8th ranks around #9. 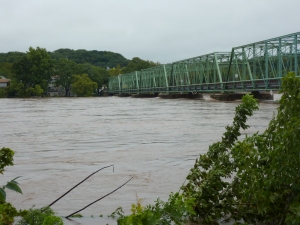 View of bridge, water lapping at the top of the piers

Taken from the PNC parking lot, the New Hope-Lambertville bridge is just making it above the water. The top of the piers is 17 feet. Only 7 floods in recorded history have covered them. 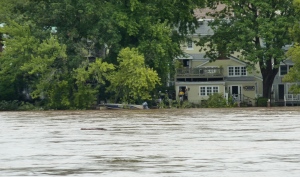 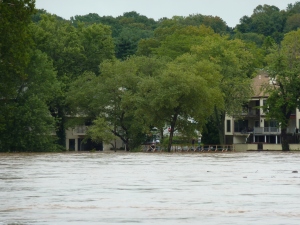 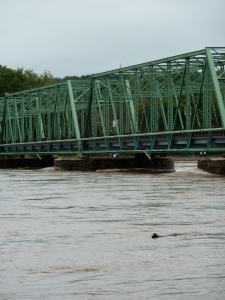 Close up shot of the piers and the water consuming them

The bridge was closed for most of the day, of course. The water was fast-moving. Large logs zoomed past. 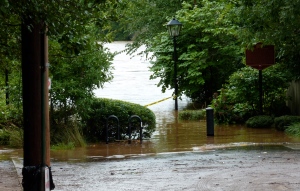 This is the park where we feed the ducks and swans. The railing is completely under water. The lamp posts are at the entry of the park. There is usually a big drop down to the river when standing at the railing. Not today. 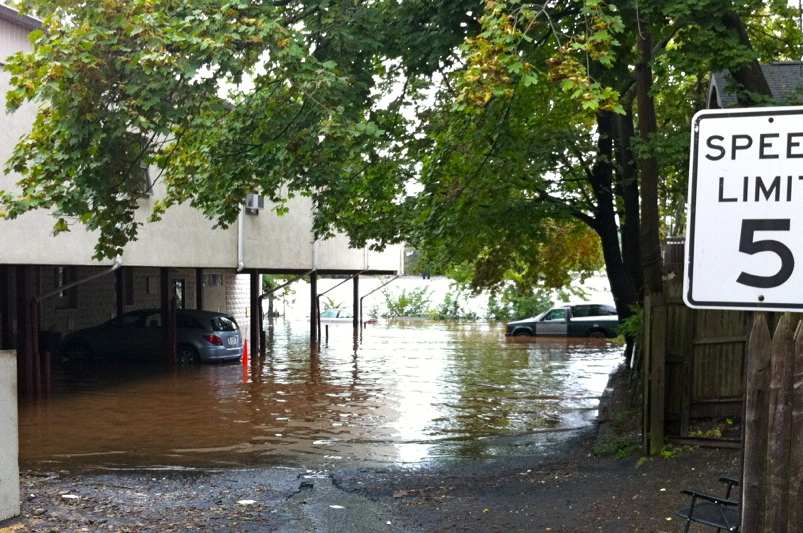 I had to put this picture in full size so you could actually see the cars. This was taken standing on River Road. 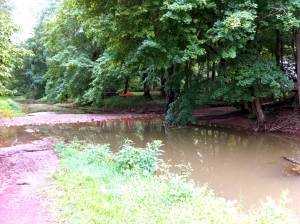 Canal with strean cutting through it in Center Bridge

This was a few days after the flood in the next town north of New Hope. This creek routed itself straight through the canal. There was a water fall on the other side of the tow path that went down into the river. I couldn’t get a shot of it, though. It could only be seen from the Jersey side behind a bunch of trees. 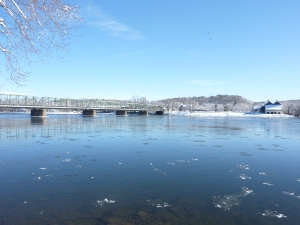 The river is high, but not flooded

Okay, last photo. This was taken in the winter (of course) from the “duck feeding area.” This just gives an idea of what the bridge normally looks like, even though it is very high at this point (this was following many snows that had melted).

It looks like things should be drying out this week. I’m ready to move on from the rain and get outside to enjoy this weather! Stay posted for homeschool posts and music posts! Thanks for reading 🙂

P.S. For photo posts, like this, are the medium pictures okay or does the full-size work better? Just for future posts…

It has come to the point where I am going to have to put the blog on the back burner for a while. We have many things going on in the life of child-rearing. I honestly DO NOT know how other moms do it- kudos to you! Between the two children, I have about 1-2 hours a day to catch up on life: shower, wash dishes, put food away, prepare any food, pay bills, make a grocery list, read, check emails, talk to my husband uninterrupted, and on the special occasion, blog. So, while I prepare for the “opening” of Hilltop Garden Academy (my homeschool preschool, temporary name), I am going to take a break from blogging.

The preschool I am designing is a blend of Waldorf and Montessori education / experience philosophies. But don’t they sort of contradict each other, you ask? Only a bit- and it depends on what aspects of each one would blend. As I research both (along with basic education philosophy, like John Dewey), I begin to see how they compliment each other nicely and will provide just the right balance for us.

We are also going through some serious discipline and transition stages with the children. I want to focus on what is best for them and support them as much as possible. This takes a lot of energy! Yow! But amazingly, all the stuff I learned in my training as a music therapist is really starting to come into focus (at least the psychology stuff). So that is exciting.

So if you are a blogger, or something like that, and have young children and no baby sitters, how does it work? Could use a little insight here…

Ahh, I already feel better. Hope to have some fun posts (and musical posts!) up in September. Until then, may the force be with you!

I wish I found this earlier this month, but I’m happy to share this wonderful opportunity with you! Valarie, of Jump into a Book, is giving away 19 gorgeous books by Elsa Beskow. Elsa Beskow has some beautiful stories, many of which I have never even heard of until now. I adore the illustrations, they are so magical! In this giveaway, you have a chance to win:

To learn more about how you can win, check out Valarie’s blog. Her blog is also great for crafts and books.

The contest ends July 31, so don’t delay! And of course, I’m hoping to win, too!

Savoring what might be the last Saturday morning I have to myself in a while, I thought I’d write about what makes it so special for me. It is the one time during the week I can look forward and plan for nearly 2 hours of staying in the house by myself. Nick takes Briony to the playroom while he does yoga. When I was still going to yoga classes, I used this time to clean and catch up on things I couldn’t do with Briony in the house (she is terrified of the vacuum cleaner).
Since about 36 weeks pregnant, I have been using my Saturdays to practice yoga at home, mostly because illness kept me out of the studio (sinus infections and food poisoning and lovely things like that). So this morning, I enjoyed a quiet, focused yoga practice. Yoga is part of my self-care practice, both while pregnant and not. I have loved it since I started 10 years ago. Fortunately, I married a fantastic yoga teacher who has been so helpful to me in improving my practice. He’s also a source of inspiration because he can do some pretty wicked poses.
The funny thing about practicing yoga throughout the pregnancy is how poses drop off little by little as one passes through each trimester. I didn’t really become affected by the changes until toward the end here. I recently had to drop sirsasana (headstand), which is one of my favorite poses, especially with a big belly. At 39 weeks, I just can’t get up there anymore, but I enjoy the two dozen or so poses that I have left available to me. It gives my body a nice release, allows my mind to refresh and leaves me feeling centered. Just right, ahhhh. 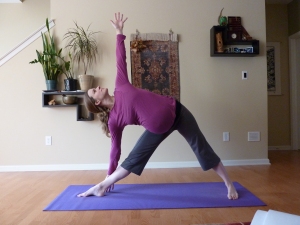 Check out the baby... 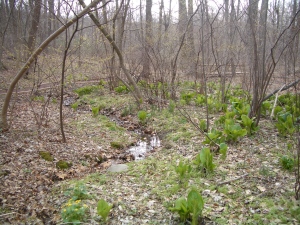 Welcome to Parentsong, a blog about the day to day life in the Bullard household. For our family, friends, and curious on-lookers. Pretty straight-forward.

Why Parentsong? Well, we are parents who sing all day long with our daughter and I am thinking of this blog as sort of an illustration to how we approach our lives together. This is our “song.” Since this is my first attempt at blogging, I expect an evolution of what exactly this is all about. After all, isn’t that how parenting works? This post is the birth.

Speaking of birth, I hope to have a post in the next 2 weeks about the actual birth of our second child. All we know at this point is that it will most likely be a baby, though I am convinced by all the “digging” this baby does in the womb that it is actually a badger.

I’m sure I could put more into this birth post, but it is short and sweet. An easy one. Thanks for reading!